Vote for whether Muller actually beat Donkey Kong Country when he was 3.

Let’s talk about all the things that are movies.

EVERYTHING IS A MOVIE WHEN YOU’RE A REAL MAN!

What Is Truly The Greatest Movie Car Of All Time?

…all iconic movie cars. But which is truly the greatest movie car of all time? Take your pick:

Speaking of the blues brothers.

If you haven’t seen this movie, you’ve missed out on the most brilliant car chases of all time.

The Most REAL Sponsorship Ever Sponsored

A huge thank-you to our sponsor this week: InfowarsMeet. This “Truth Focused” dating service allows you even more filtering options than we presented on the episode (we simply ran out of time). Here are a few more options available:

Am I Really Reaching With Donkey Kong Country? Can Movies Really Learn Nothing From DKC2?

In John Cleese’s lesson on creativity, he taught why his ideas were more original than his colleagues:

“I always threw out my first idea, and took another stab. I found that while my first idea may have been funnier to some people, my subsequent ideas always beat the crap out of my stupid Monty Python colleague’s cerebellums (and were always more original)”.

I think that’s how the quote goes. But what’s important is that rule is only useful for John Cleese writing Monty Python skits. There’s definitely no way you can translate that into a different medium.

According to Andy, I guess there’s no way in hell I can use that universally true idea to help me write comedy segments for the podcast, is there?

If I threw out my first joke and tried to come up with another version of the joke, it just…wouldn’t work. This lesson would just implode on itself.

If I was Andy, I would say something retarded like:

“I fail to see why that advice had anything to do with podcasts. John Cleese is an ACTOR! Not a podcaster! It’s just totally irrelevant.”

It’s almost as if there are universal equations and rules to:

Bahh who am I fooling. Clearly this is all nonsense and you can’t learn a single thing from any medium except for the direct medium you’re currently practicing in.

Stick to the guitar Johnny! The drums can’t help you! That way we can keep getting the same brand of music forever and ever. Don’t ever try to do anything new, you’ll only fail.

Look At These Killer DKC2 Levels

The resolution of these images is choppy and gritty, just like a man should be. In the middle you can see the overview of the map (the wide shot). Surrounding that, each specific world comes into view (the medium shot).

Closeup of the world map: 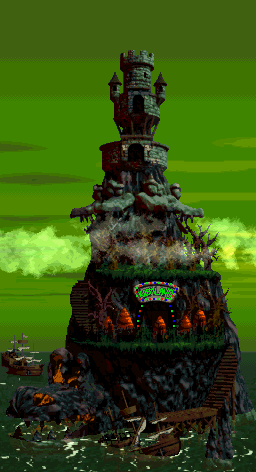 Notice the scary lava crocodile head? How about that creep sunken ship at the bottom? Or look in the middle of the map – there’s some sort of awesome party or carnival going on there. COUNT ME IN!

And if you make it past that, you get to invade King K. Rool’s airship: The Flying Krock! 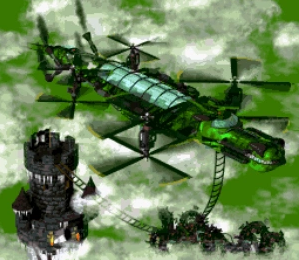 Here you can see a ghost dude chasing the Kongs on a haunted roller coaster in some sort of…hell library. Look at that ghost pirate skeleton’s bandana! That’s cool as HELL! 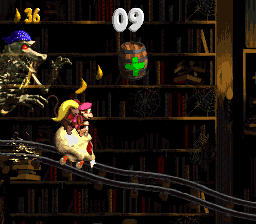 Remember when I said that Dixie and Diddie have awesome exit music? Look at these two punk-ass monkeys play their instruments.