Let’s Get Right To IT

Did you get It? Did you get THAT too? I’m never going to tire of all the fun word games people have engaged in with the movie/TV miniseries/encyclopedia “IT”.

Where does this phrase come from anyways? The Medieval sewers of the English language one would assume. Perhaps it was bestowed upon us by of an all-powerful space turtle.

I guarantee Steven King has never heard the expression. 1100+ pages just to tell a story about an alien clown spider who lives in a storm drain and watches a group of preteens gang bang one of their friends? Come on Ol’ Stevie Boy.

Steve needs to take a page out of R.L.Stine’s book. Just a page, not 1100 of them. Stine knows how to write a good succinct story. Most of his novels are less than 200 pages, and they’re so well-written that even a kid can understand them!

What’s that? King’s “books” have been used as source material for various films and television series? Well Stine’s books got turned into 4 seasons of television! Has King ever been so beloved that a movie was made where he was a main character and had to battle all of the monsters from his various books?

Stine is an author so good that Sony just couldn’t settle on one book, they had to take all the best things from his most popular books and cram them all into one feature length film…and release it in October…and have Jack Black play R.L.Stine…yeah that sounds like something Sony would do.

But still, R.L.Stine has upped Steve King at every turn.

Who would you rather do? 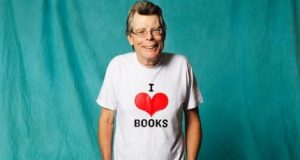 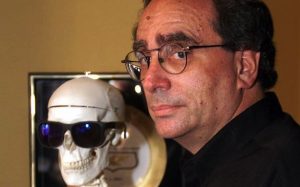 Even M.Night Shyamalan has blatantly ripped off ideas from R.L.Stine’s novels. For a critical analysis of this, listen to my segment on Episode 8 regarding The Sixth Sense. Prepare to be enlightened.

What’s So Scary About It?

I mean, did Stevie K. just rip off Bozo The Clown for the 1990 IT miniseries? I remember watching The Bozo Show early Sunday mornings and thinking about how stupid all the kids were. They wouldn’t have stood a chance against my increasingly hairy upper lip and quickly maturing calves.

No, there weren’t kid contestants on this show like in Uh Oh! My aggressive and angsty 10 year old self just wanted to fight the kids in the studio audience.

But I still remember thinking Bozo was funny. What an idiot I was. 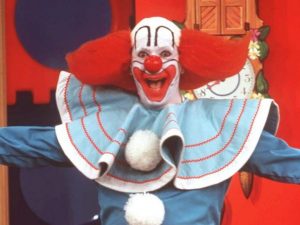 IT’s Influence Felt ‘Round The World

Thanks to the godsend of 1990, a generation of children from the 80’s and 90’s have carried on an irrational fear of clowns.

One thing we can thank IT for is its popularization of clowns into mainstream media. I wrote my PhD Thesis on this subject. If it weren’t for Thyme Curry, we most certainly wouldn’t have Doink, one of the most iconic wrestlers of the 90’s:

Here’s another classic: Vulgar. This gem from 2000 is about a party clown for kids. Here’s a shot that sums this movie up perfectly:

Let’s not forget the 1988 klassic Killer Klowns From Outer Space. Okay, this came out before 1990, but I’ll take any excuse to talk about KKFOS. ANY EXCUSE.

If you’ve ever had the urge to watch a shadow puppet devour a crowd of people or watch humans get turned into cotton candy, then this is your movie. Now let’s watch a guy get pied to death:

Well, as you’ll hear on the podcast, we actually had some positive things to say about it. I think what I liked most is the accurate portrayal of IT. I think they really nailed it. 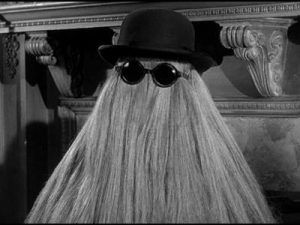