History In The Making

Pretty soon the word “history” will be deemed offensive because it starts with “his”. This word implies that history belongs to men. It will be changed to “herstory” by some radical feminists out of spite, but will eventually devolve into the inoffensive “theirstory”. Did you know the word “Mystery” used to be spelled “Mistery”? We should probably prepare for the following words to get censored:

But I digress. I note this episode as being historic not because we discuss a video game as a movie (this isn’t even the the 1st time we’ve done this  – THANKS MULLER). And not because we’ve collectively outed anyone who identifies as an “ally” to any social cause as someone who also sits down to pee. And especially not just because this is our first episode in months without an annoying, know-it-all guest who fans keep telling us all need to form a coup together and pry this show away from us (after we’re brutally murdered of course).

Because we deliver your weekly movie hate every second week, episode 26 marks our sort of anniversary! The same way that This Is 40 was advertised as a “sort of sequel” to Knocked Up. Just kidding. The only way anything related to Judd Apatow makes it into our content is to make fun of his “work”, or his ugly face. Shots fired. Take that, Dudd Apatow!

Really Guys? ANOTHER Video Game Brought In As A Movie?

Again, I feel like I should blame Muller for this, but we all contributed to this idea. Now let’s not compare the previous masterpiece of a game Mullerboy brought it, Donkey Kong Country 2, to these newer garbage games.

With the exception of newer indie games that were inspired by the older generations of gaming, most of my gaming comes from consoles released in the 90’s, and sometimes the GameCube. And in my defense, before you call me a sellout for liking Gamecube, it has 2 different Mega Man collections, like 6 Resident Evil titles, and Eternal Darkness: Sanity’s Requiem.

Have you ever wondered what it would be like to be the best white guy at parkour? Ever wonder what it would be like as a young boy to sneak around a Catholic orphanage after hours? Do you love your brother so much that you ditch your wife all the time to commit heists in exotic countries, further complicating your incestuous feelings towards one another? What if I told you there’s a magical game that mixes all these things AND features close to 8 Hours of cut scenes and quick time events?

These were things I had never contemplated in my life until I watched part of a play through of Uncharted 4. I would rather take a 15 Hour dump than play through this game. I once lost 7lbs after a 2 hour bowel movement I took when I was 17. The next day I bragged about in English class while I ate tuna out of a can. It didn’t sound as cool and/or funny as it did in my head.

The whole time I was watching this Uncharted 4 play through, I kept wondering when Drake was going to pop some Advil. Let’s be real. This is the 4th game. There is no way this guy doesn’t have some muscle or joint inflammation from all the jumping around he does. The commentator on a play through I sort of watched kept talking about how exciting the game play was. All I could think was “Somebody get this guy a protein shake!”.

Nathan and Drake Are The Same Guy

I had the above revelation during the show. Moving on.

I’ll be right back, I just need to grab a box of Milk Judds. 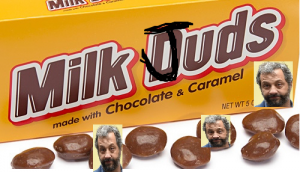 Heavy Rain Is A Tale Of Envy

David Cage spent his whole life living in the shadows of his cooler older brother Johnny Cage. Legend has it that his venture into the gaming world, and creating games that are movies themselves, is his way of trying to show up Johnny. As a Hollywood action movie star, turned pro fighter and video game icon, it’s hard to top such a cool cat. I’m not sure why David would even try.

Just look into those eyes. 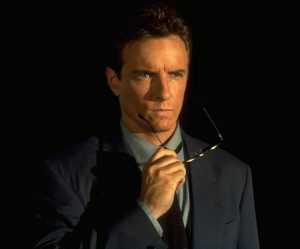 Now look at this guy. I’d be depressed and overcompensating in my professional life too.

If you just want to make some movies, then quit half-assing it and make one! Start by watching every movie Judd Apatoe has been involved with.

And then kill yourself.

I better go, dinner is ready now. Time for a Spud Apatow! 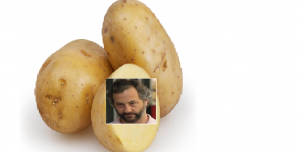 Andy gives us GREMLIN OF THE YEAR this episode. That’s probably the only good reason to tune in this week.

Muller and friend of the podcast Jason recorded this preview of a Heavy Rain sequel back in 2015. It was so good that Dave Cage thought it was a game HE made after he watched it. What an idiot. He’s not this clever.