This Isn’t Your Uncle’s Space Odyssey

I wonder if 2001: A Space Odyssey freaked out pending astronauts who first landed on the moon the following year. Did Neil or Buzz find a monolith on the moon? Is there a giant space baby floating around out there? Probably not. This is why Stanley Kubrick should’ve also filmed the moon landing.

Not only did the Kubemeister broaden our minds by having us question our existence, purpose, and what it means to be human in his 2001: A Space Odyssey. He also touched our hearts with the lovable HAL 9000.

I often wonder about the previous HAL versions. What was the original HAL like? What do we know about the human who his voice is based on? Who was his original creator? What changes were made that led to the HAL 1000, 2000, 3000, etc. These are questions we all have. Come to think of it, Kubrick really missed out on some serious box office bling! Just imagine a 2001: A Space Odyssey extended universe!

There could be a movie about all of the HAL models and what led to HAL 9000. Perhaps future HAL models were created with more restrictive prime directives like Robocop so they couldn’t harm humans again. Or maybe the HAL robots took over the world and enslaved humanity. There are so many exciting possibilities!

We could have a movie about the apes at the beginning of the movie. After they learn to kill they quickly learn how to walk and talk. They could ride horses and shoot machine guns. What’s not to love? I guess there could’ve been some serious legal backlash with the Planet of the Apes franchise though.

We also missed out on at least 1 movie where the space baby goes on adventures to new worlds, helping other civilizations transcend into space babies.

This baby is a powerful symbol. I’m surprised Planned Parenthood hasn’t lobbied to have this movie banned. Or least try to have it edited into an ending where the universe decides it doesn’t want its space baby any longer and aborts it.

You can’t tell the universe what it can and can’t do with its body!

But male robots are much neater! Thinking about Hal 9000 has me reminiscing about my favourite robots:

Call Me Kenneth from the Judge Dredd comics 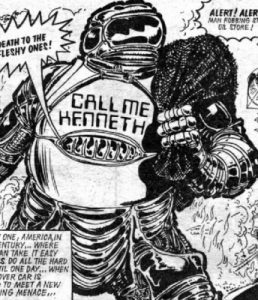 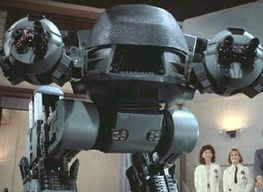 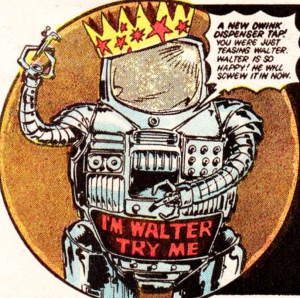 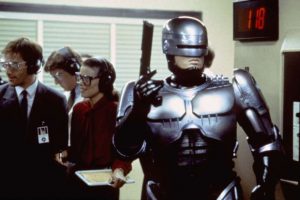 And who could forget Johnny 5 from Short Circuit 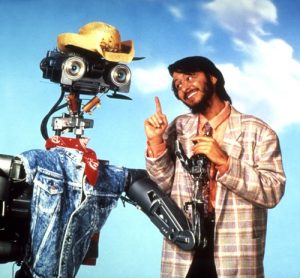 When is the Judge Dredd/Robocop/Short Circuit crossover going to happen? Come on Netflix! You make everything into a series. This one pretty much writes itself!

Wait, how did we get back here?

Just go listen to the episode! You can see how silly these postmodernist Muller and Jono are for ripping on such a classic film. I mean movie. Damn it. Now I look pretentious too. I’m just going to drive to the nearest foundry and hop into a lava pit. See ya! 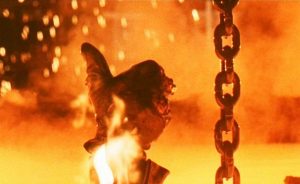